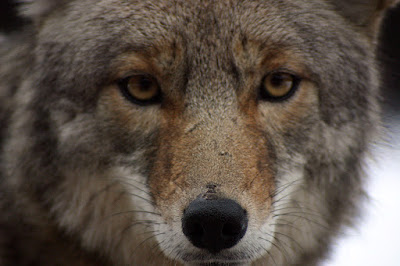 Episode 1: Coyote
My very first episode was over Coyote's. Why Coyote's? Because I have been fascinated by them since I was a kid. The two houses I grew up in were both surrounded by farmland and either a pond or a creek so hearing them howl at night was something that I always got excited about as a kid. The thought of these wild wolfish predators was equal parts terrifying and mystifying. On occasion when we'd stay up late, my dad would bring out a super duper bright spotlight he kept in his truck and me and my brothers would just be exhilarated when we saw their eyes shine back, seemingly staring at us. I didn't pay attention to it at the time but my folks probably just wanted them all dead!

If you hunt, or if you just walk into a store like Cabela's you've probably seen the massive marketing that gets pumped into predator hunting. With "predator" basically just meaning Coyote. They have a reputation as a nuisance critter and maybe even a dangerous critter. In most states Coyote hunting and trapping is virtually unregulated, and it's open season year round. If I was selling hunting gear, Id be all over it too. It's strange when you think about the whole thing. Most people don't own animals that are at risk of predation and even then it's usually a fairly minor amount of loss. But the "threat" we perceive in our minds is huge. We tend to think of something like a dire wolf in our mind when really, they're more like a Britney.

Myself, I have some property, and I have some chickens and turkeys etc... I have had plenty of them lost to Coyote's though usually thats more my fault, leaving the coop open at night and such. But I don't live in the "boonies" so i always wondered, if there is all this pressure on these animals, and they're bold enough to steal a pet chicken out of backyard or even dog food from a porch, then how the heck are they not much nearer to extinction like wolves? And why do wolves get viewed with so much sympathy or mythos by so many people while the coyote is getting shot at by 10 year olds learning to hunt for the first time?

At the time, I happened to be on a Native American myth/legends kick. And if you've ever looked into that, you've no doubt come across numerous "Coyote" or "Old Man Coyote" stories. There are way to many stories to bring up here but it's clear that the original Americans saw something in this animal that set it apart from the rest. During a discussion with a friend of mine, he mentioned that Joe Rogan had a Coyote guy on some time ago that talked all about Coyote's in a practical scientific sense as well as a the mythical/religious sense of the Natives. I was sold!

So thats how "Coyote" became the first thing I recorded for the podcast! One interesting tidbit, if you've been reading it Kai-YO-Tee then you are likely to view them less negatively than a person who reads or pronounces it Kai-Yoat. I have observed that to be true in my own little corner of the world!

As for the "Future Posts", it is my intention to do something like this for every episode I produce. It will take a me a bit to get caught up, so some posts will be out of order but they'll surely come! And I'll link to the major source material that helped me one way or another along the way. For some topics like "Gods of Egypt" or "Gilgamesh" you can expect a longer more elaborate post that supplements the info in the episode.

Also, check out my "Library" section, It'll always be changing and growing with a list of books/audiobooks that I own and recommend!

Here is a list of the main material I was consuming when I made Episode 1: "Coyote"
Understanding the Coyote from Kansas State University Extension Service
Dan Flores on JRE