Thinker in the Gates of Hell

on July 22, 2019
I had planned to release a space related episode before the anniversary of the Apollo 11 moon landing. I also have planned and Episode diving into the apocryphal Book of Enoch, various global flood myths, giants etc...

But alas, life happens. I've been busy with school (yes summer engineering classes 😔), and trying to squeeze in some camping and enjoying the summer despite most areas in the midwest being flooded. I just haven't had the time, or have failed to make the time to study for a podcast epsode and release it. Another battle, is my own internal back and forth between aiming for longer 1 hour-ish episodes like Gilgamesh, or shorter episodes around the 20minute mark. I've been stuck in that rut and as a result, haven't been able to crank out a podcast. Though there have a been a couple of blog posts with podcast relevant topics. The last post "Mars Fever" is a sort of companion to Episode 7: Nikola Tesla and the Martians .

For the most part though, I've felt like a perpetual thinker, at the gates of a sort of content hell. It's not  that there is no content or ideas, just no action, or an over emphasis on content that was, or could be.

There are a couple of interpretations of the famous "Thinker" sculpture within the gates of hell. Some say it is perhaps Dante, looking down at the activity of Hell, Rodin the artist reflecting on his work, or Adam contemplating the fall of man in Eden. I particularly enjoy the thought of Adam. Could you imagine being Adam in that situation and carrying the weight of that guilt?


A little less heavy, but relevant to me, it represents the bustle of activity in the background while I sit and contemplate, ultimately doing nothing. To me, the "hell" is politics. I am most definitely a religion and politics guy.  And "Wading In" is an outlet for me to examine religion in more lighthearted way and steer clear of the muddy political stuff that so easily engulfs my mind. But it is increasingly hard for me to NOT inject politics into some things. And that hit me hard as I prepared for a space/Apollo themed episode that never got released.

The "Space Launch System", often referred to as the "Senate Launch System" is NASA's planned 'recycled shuttle parts mega rocket to nowhere' and has been a political thing since its inception. Click that link for a 2011 take on the program when it was new.  Doing away with the Bush era Constellation program and promising a cheaper more capable single solution. Except that didn't happen. As with most of the grand public space policies it has severe problems. And the recent announcement of a return to the moon seems equally foolish in all practicality. It comes across like the sort of grand claims the Soviet Union would make, while dumping money into the hands of some political crony's but never really producing a result. 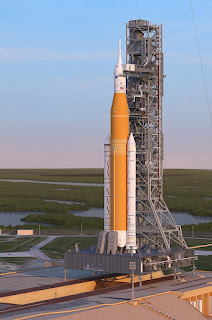 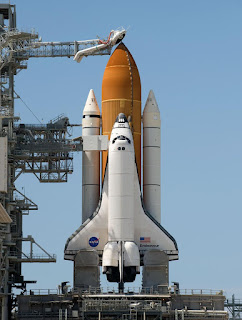 SLS rendering next to a Space Shuttle on the Launch Pad. Spot the Similarities? Just remember that the Space Shuttle first flew in 1981. And no, it's not actually cheaper now, and it's less efficient. If you ran a business like this you wouldn't be in business.

That of course is not unique to "space", it happens everywhere people are involved. Particularly when the people involved don't have to spend their own money, which is to say...government.

From there, the tangent continues. But I don't want to do "politics" with Wading In (maybe), even though I think "Wading In" is a pretty great name for some political content. Maybe I'll make a spinoff called "Wading Out" that jumps into politics so you can avoid it and I can keep "Wading In" as my own personal "safe space". I could do maybe 15minute episodes over some current event or policy...idk...

So here I am, feeling like the Thinker at the Gates of Hell. Chaos in the background and no tangible results coming from the thinking.

So the plan for now is to focus on the Enoch episode or something very similar to it. And at the moment, I'm thinking shorter 20-30 minutes tops, and if I need more time I'll break it up into parts. I do want to inject some politics into my routine, but don't necessarily want to do that here (maybe).

Do you listen to politics/news podcasts?
Should I do that here or stick to the plan and earlier promise of no politics in Wading In?
What sort of format would you like one focused story and a narrative, or two or more people bouncing back and forth?

Let me know in the comments, by email, on Facebook, or Minds!