This blog is intended to be a companion to a podcast I do of the same name. But recent news articles about mysterious "drone swarms" seen across Colorado, Nebraska, and In my case Kansas have me going back to an event that happened a few weeks ago that I think is related. Ive posted about it in a few places, but figured Id collect all my thoughts and post them here for easy reference that isn't broken up in Twitter threads.

On December 10th I was outside around 8pm. I thought I saw some unusual lights buzzing around nearby but didn't pay much attention. We are not far from an airport, an Air Force base, crop duster territory, and the occasional Fan powered Parachute contraption people fly around on. A little later, I thought I saw the same lights flying closer to my house.

At about 1030-11pm my wife came home and was excited about something she had seen flying around much lower and later than usual. I remarked about the thing I thought I had seen few times earlier that night. She described it as a small plane or drone of some kind.

Very quickly we saw one, and it was indeed the same lights Id seen earlier, a few miles from our house and near where my wife had seen it. We went down the nearest road to it and found it hovering over an empty field. I shined my brightest flashlight at it, but it was to high to have much effect. The craft appeared to be roughly triangular in shape, and had wings. At the time I guessed 5-10ft in diameter.

While hovering over the field it was perhaps a couple hundred feet in the air. And not making any real discernible noise. Then it started moving again, towards the north. I pulled out my phone and took the following video:

We sped up to chase it and got up to about 70mph but the drone was pulling away. We kept going but it just kept pulling away until it was about 4 miles or so ahead of is. Then it went a little east and started back south. About this time, we noticed two more identical craft ( further to the east, lights and flight pattern the same atleast) doing the same thing. Going North to South and seemingly moving east. We followed the one in the video for 30 minutes or so as best we could. The last sighting was over a neighborhood near the highway.

A thought occurred to me though, my brother works in 911 dispatch. I asked him if he knew of anything going on out any other reports and he said no. The local police do have some drones, but nowhere near my area at the time or of that description.

Then a few articles were published online about sightings in other places.

And so here I am rethinking the whole thing. If you get on Facebook or Twitter you can find a few examples similar to what I saw in Colorado. The lights are the same. Leading to me to think its the same freaking thing. What is baffling is that the FAA allegedly its unaware of the drones, for drones that size, speed, altitude they would I think have to have FAA approval to operate. The military has also denied knowledge of the event.

If you asked me to describe what I believe we saw that night, I would suggest that in form it looked similar to this drone, the eBee Classic by sensefly. Its the right shape for sure! BUT its not big enough, fast enough, and it cant hover. Though it fits that its a "mapping" drone which has been my favorite suggestion for the strange, regular flight pattern of the objects. 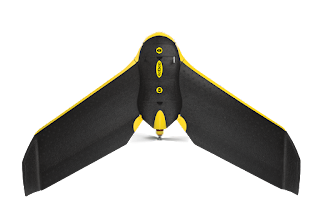 The news reports support my observation, by suggesting a 6ft wingspan/diameter. But Im still stumped by the speed. Certainly there are some fast drones out there, but that stay airborne for over an hour, and can do that top speed for much of it? I cant think of or find any that are something you and I can buy.

So if you see one, get your phone out asap! I BLEW IT, by staring at the thing like a dummy when it was sitting still over a field.

Really, if this is a thing, we need some folks in these other places to start upping their camera game!

Paying more attention to the dates.

As I see more I'll pay attention to that. Heres the thing, the only people saying "swarm" is the media. No one else anywhere I've seen on twitter or Facebook is reporting more than 3-5 at any given time. These have 6ft wingspans. They aren't the simple DJI variety drone they keep picturing. They're shipping them around place to place on trucks if you ask me.

Also, is this related?
https://www.msn.com/en-us/news/technology/pentagon-testing-mass-surveillance-balloons-across-the-us/ar-BBYdtGx

They're testing surveillance balloons in the general areas of the drones. The balloons are the "tip of the iceberg" according the Vice President of Raven Aerostar who is in on the project. Are the drones working with the balloons?

Get your boogaloo stuff together...

A few theories/thoughts in no particular order:

Federal Gov ( FBI, DEA) - Manhunt for someone, or thing.