The Book of Giants 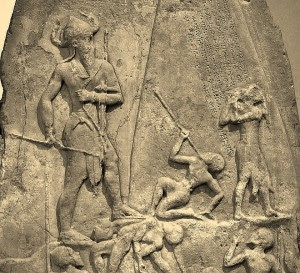 The Book of Giants is a book that is part of the antedilluvian (pre-flood) narrative established by the Book of Enoch. It takes a look at the events in Enoch from the perspective of the Giants, the offspring the fallen angels unholy union with human women.

Loosely described as gigantic evil beings that perhaps weren't to bright, they dominated the landscape and humans were utterly powerless against them. So much so that these misdeeds would play a part in inspiring the good angels and God himself to intervene and wipe them and the fallen angels off the map.

Lots of familiar names pop up in this book, including some fallen angels mentioned in Enoch, and even Gilgamesh. Quite possibly the same Gilgamesh of "epic poem" fame.

Aside from Giants, we also get "Monsters", the product of the mingling of Human, animal, and "Sons of God" genetics. There isn't a ton of description given to the monsters, but they're clearly "superhuman", and I like to imagine them as looking something like the depictions of the Egyptian Gods Set, Horus, and Anubis, and the Sumerian Annunaki.

The Book of Giants is found primarily in the Dead Sea Scrolls. And rather than go on and on, Im gonna list some sources you can check out!

My episode "The Book of Enoch"

And some related previous blog content
The World before the Flood
Gilgamesh Addendum: Flood Myths
Syncretism

What do you think about the Book of Enoch and the Book of Giants? Did giants build the pyramids? Did the sons of god fly around in UFO's? Were the Egyptian Gods "monsters"? What do you think of all these myths that incorporate a flood story and a great separating from the ways things were to the way thing are? Is it all pointing in a similar direction, but mixed up by something like the Tower of Babel, time dan distance? Or is it all misguided syncretism? Let me know in the comments, or hit me up on Facebook and Minds!

Also consider supporting the show and website! With as little or much as you care to give!
Become a Patron!